Earth Strikes Back with the Double Asteroid Redirection Test!

If an asteroid is speeding toward a collision with Earth, how could we knock it off course?

This isn't just a movie plot. Asteroids, comets and other large particles – lots of them —really do lurk in our solar system and pose a serious threat to our planet. Should one ever get close enough to impact Earth — like the 2013 meteor that exploded in the atmosphereand sent damaging shockwaves across six cities in Russia — we would need to know how to deflect it. But that has never been done before.

In this keynote, Elena Adams will discuss the Double Asteroid Redirection Test — or DART — NASA's first planetary defense mission and "live" demonstration of asteroid deflection. The spacecraft will slam into the asteroid with enough impact to alter the object's path. DART will aim for the smaller body in the binary asteroid known as Didymos, intercepting this small "moon" in October 2022, when the asteroid system is close enough to Earth to be easily (and safely) observed with ground-based telescopes. The DART spacecraft will autonomously guide itself into the asteroid at nearly 15,000 miles per hour. If all goes by design, the impact will change the time it takes the moon to orbit the main asteroid by about eight minutes, enough to be observable from Earth.

The DART spacecraft is currently being built and tested at the Johns Hopkins University Applied Physics Laboratory in Laurel, Maryland, and is set to launch in July 2021. 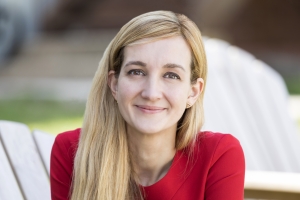